TRIPLE NEGATIVE BREAST CANCER DIFFERS BETWEEN THE YOUNG AND THE ELDERLY

Somatic Mutations May Explain the Difference 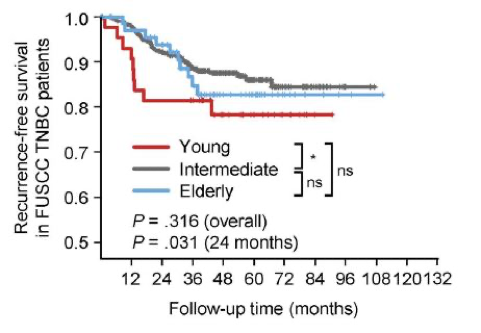 I think that we are all aware that triple-negative breast cancers have a higher proliferative rate, and are more aggressive than other cancers. Moreover, they have a higher risk of distant metastases in a poor response to therapy. However, we now know that triple-negative breast cancers are incredibly heterogeneous. For instance, we understand that the age of diagnosis is valuable in predicting the outcome of triple-negative tumors. The behavioral differences in these cancers would alone suggest a difference in the underlying biology of triple-negative tumors affecting the young and the elderly. Similarly, this would also indicate that the disease in these two groups of women might be unique disease entities.

A new study from the Fudan University, Shanghai Cancer Center attempts to shed some light on this issue. This current study presents results from the largest single-center cohort of patients with triple-negative breast cancer to date.

The authors divided 473 patients into three groups based on age. Fifty patients (young group) were less than or equal to 39 years old. Three hundred fifty-four were considered in the intermediate group and ranged in age from 40 to 64. Sixty-nine patients were considered in the elderly group and were greater than or equal to 65 years old. The median length of follow-up was 47 months. Clinical outcomes were examined. Young patients were noted to have a worse two-year survival when compared to the intermediate age group.

Interestingly, there was no difference between the young age group and the elderly age group throughout the follow-up period. Other clinical pathologic features were also studied. Though there was no difference between groups when considering tumor size and grade, elderly patients demonstrated a significantly lower Ki-67 index when compared to others. The tumors in elderly patients also were noted to frequently have severe fibrosis which is generally reserved for hormone-positive tumors.

Using transcription-based subtyping, the authors noted that nearly ½ of the elderly patients had tumors that were of the luminal androgen receptor subtype. Gene expression surveys were also carried out. In younger patients, gene sets involved in DNA repair cell cycle, and RNA metabolism were repeatedly noted. In the elderly cohort, hormone-related gene sets were observed to be expressed more frequently. They also noted that elderly patients were more likely to harbor somatic mutations in PIK3CA. (Of interest is that in a recent post on this site a drug that was effective in blocking the PI3K-AKT-mTOR pathway, apelisib, in postmenopausal hormone-receptor-positive females. It was also interesting to note that elderly patients with triple-negative breast cancer were more frequently found to harbor at least one targetable and/or potentially targetable mutation (PIK3CA, KMT2D, ERBB2, ERBB3).

Despite the differences noted triple-negative breast cancers affecting women of different ages appear to carry comparable somatic mutation loads. They found that homologous recombination deficiency (failure to repair double-stranded breaks), were similar in young and intermediate age patients but were unusual in the elderly cohort. On the other hand, elderly patients had a much higher percentage of clock-like tumors (tumors which contain mutations that occur at a steady rate in a “clock-like manner “compared to the episodic mutations that generally happen). Of course, young patients with triple-negative breast cancer were much more likely to harbor pathogenic germline mutations compared to their more elderly counterparts.

In summary, the authors found in this large cohort of triple-negative cancers, many genetic differences which may explain the outcome of patients who are younger versus those who are in the older age groups. However, they have failed to discover specific genetic differences that can be easily applied in the clinic to differentiate the young, intermediate and more elderly patients and to use these differences in management.