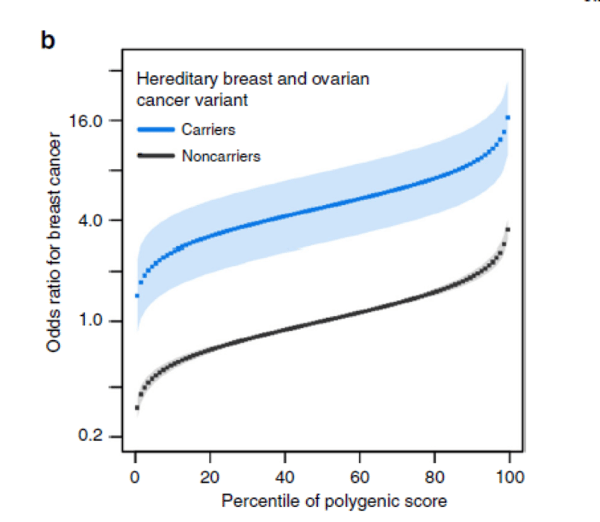 Monogenic variants have a substantial effect on disease, the best example being BRCA1/BRCA2. It does this by causing a major disruption of a specific physiologic pathway. Polygenic variants have smaller effects on individual pathways but cumulatively may have a significant effect on a disease. The effect of polygenic risk scores on developing breast cancer was covered on this website in January 2020.

In a recent study by Bick et al. published in Nature Communications, over 80,000 individuals were studied to determine whether polygenic background can modify the penetrance of three tier 1 genomic conditions: coronary artery disease, Lynch syndrome, and hereditary breast and ovarian cancer syndrome caused by BRCA1 and BRCA2. Tier 1 genomic applications are defined by CDC’s Office of Public Health Genomics as those having significant potential for positive impact on public health based on available evidence-based guidelines and recommendations. For this post, we will limit our comments to those applicable to breast cancer.

The researchers examined the interplay of monogenic and polygenic risk factors for hereditary breast and ovarian cancer syndrome. They first identified monogenic risk variants by sequencing BRCA1 and BRCA2 in 1,920 breast cancer cases and 17,344 controls. These patients were obtained from the Color Genetics laboratory. A likely pathogenic variant was identified in 174 (9.1%) cases and 671 (3.9%) controls. They then used a previously validated polygenic risk score for breast cancer to identify any perturbation of risk in BRCA patients. They noted that the polygenic background affected risk in both controls and, most importantly, in those carrying a pathogenic variant. Looking at the lowest quintile of the polygenic score distribution, the increased risk among BRCA carriers went from 2.40-fold to 6.85-fold for those in the highest quintile.

They then reviewed all genetic variants in BRCA1 and BRCA2 from the UK Biobank, this time identifying 115 carriers of BRCA1/2. In this case, the polygenic risk score was associated with an odds ratio of 1.61 with a linear relationship to the risk of breast cancer. Most importantly, “Joint modelling of both monogenic variant status and polygenic score estimated that the risk for breast cancer among carriers of a BRCA1 or BRCA2 variant ranges from 1.43-fold to 16.68-fold increase in risk across percentiles of the polygenic score”. (See image above)

DOES THIS NOMOGRAM REDUCE THE NEED FOR SENTINEL NODE BIOPSY?