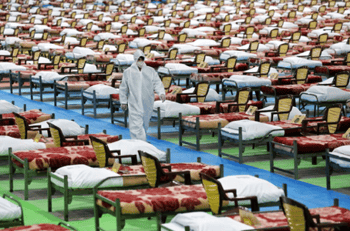 Again, the editors consider it essential to urgently publish new information on COVID-19 that our readers may not have yet had the opportunity to read. This study fulfills this criterion.

Urgent health measures that were implemented in six major countries have “substantially slowed” spread of SARS-CoV-2 and COVID-19, according to an urgently published paper by a multinational team headed by Solomon Hsiang at Berkeley. The research team studied the rapidity of the growth of COVID-19 within each country before and after containment policies were put in place. They were then able to measure how each policy contributed to flattening the curve. They were also able to calculate what the total infection rate would have been had everyone been tested.

In summary, here is what the total number of cases that would have occurred had containment policies not been enacted.

Though the study did not estimate fatality rates, they would have certainly been considerably higher than those currently reported.

The researchers detected the arrival of the virus in a specific country and then noted when major interventions were put into place. They were then able to track the data over time noting how numbers and growth rate changed. The researchers found that home isolation, business closures and lockdowns often produced the clearest benefits. Travel bans had clear benefits in Iran and France, but benefits were less clear in the United States.

They found that it took approximately 3 weeks for any policy to achieve full impact on the spread of COVID-19. Consequently, as policies are relaxed, we might expect two to three weeks to see an indicator of renewed spread.

Hsiang noted that “Our analysis of existing policies indicates that seemingly small delays in policy deployment likely produced dramatically different health outcomes. Before intervention, infections were growing at 38% per day on average-doubling roughly every two days in each country-before crisis policies slowed the spread.”