LESSONS NOT LEARNED FROM THE 1918 SPANISH FLU PANDEMIC 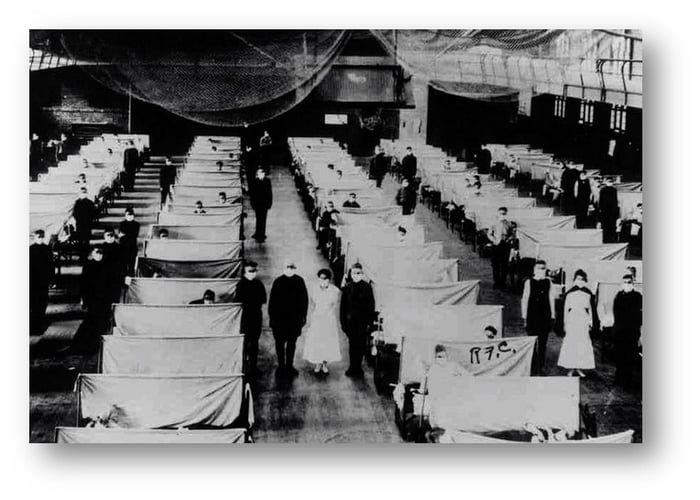 Introduction: Following completion of the book, Premonition (Michael Lewis), I became interested in whether there were lessons to be learned from the 1918 Spanish flu pandemic. To my knowledge, one of the best academic studies on this topic was published in February 2007 by Hatchett, Mecher, and Lipsitch in The Proceedings of the Royal Academy of Science. What follows is a concise assessment based on this paper and the book Premonition. If there was a thought leader in this group of authors, it was Carl Mecher, a physician who retired from clinical medicine to specialize in public health.

The paper's authors examined the effects of nonpharmaceutical interventions (NPI), including voluntary quarantine of infected households, closure of schools, ban on public gatherings, and other measures to reduce disease transmission. Note that this did not include masks. It is likely that the only masks available in 1918 were the cotton masks, which became available to operating room personal in the late 19th century.

There were three pandemics in the 20th century (the Spanish, Asian, and Hong Kong influenza). COVID-19 is now the first pandemic of the 21st century. Since vaccines and other treatments may not be available in the early days of a pandemic, nonpharmaceutical interventions (NPI) may be necessary. Though there were no NPIs instituted for the Asian and Hong Kong influenza there were NPIs initiated for the 1918 Spanish flu because of the high death rate. The authors question whether the time of initiation of NPIs reduced total excess deaths. To do so, the researchers analyzed data from several US cities during the initial wave of the 1918 pandemic. 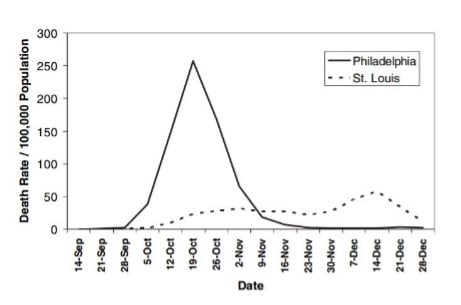 instituted NPI after identifying pandemic deaths. The difference between Philadelphia and St. Louis was particularly striking. The first civilian cases were first reported in Philadelphia on September 17, 1918, but authorities "allowed large public gatherings, including a large city-wide parade on September 28." School closures, ban on public gatherings, and other NPIs were not instituted until October 3. The excess peak weekly death rate from pneumonia and influenza for Philadelphia was 257/100,000, whereas the total cumulative death rate (CEPID) reached 719/100,000 (see graph on the left). Contrast this to St. Louis, where the first reported case was on October 5, and various social distancing measures were instituted two days later, on October 7. St. Louis experienced a peak pneumonia and influence rate of 31/100,000 and a CEPID of 347/100,000. 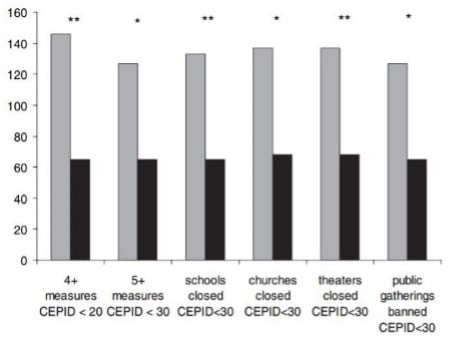 Yet Philadelphia and St. Louis were not the only cities where death rate differences were noted. The authors examined the excess death rate in multiple US cities. The graph on the left shows excess pneumonia and influenza rates combined for numerous cities. The black bars represent cities instituting early interventions vs. the gray bars depicting cities with later interventions.

The authors also noted that most nonpharmaceutical interventions were relaxed within 2-8 weeks, igniting a second wave for all studied cities. The authors could not conclude the optimal length of time that NPIs should remain in place.

Conclusions and Comments: Based on the reproduction number (R0), 2.2, for the Spanish flu, as well as exponential growth over the difference in NPI institution in Philadelphia and St. Louis (approximately 14 days), 3-5 doubling times had occurred. Compare that to the reproduction number for the delta variant of SARS-CoV-2, which is 8.5, approximately the same as chickenpox. It is reasonable to conclude that even a reasonably short time difference in the institution of NPIs is critical in reducing peak weekly deaths and cumulative deaths. One might also conclude that there appears to be a general lack of understanding of exponential growth.

A pandemic plan was conceived during the George W. Bush administration called PREDICT. It was tasked with testing animals worldwide to determine whether they harbored a virus that may jump to people (zoonotic). It was funded through the Obama administration but ultimately defunded during the Trump years. By the time this group was created, technology had advanced to a state where the researchers could catch any new virus the moment it had appeared in humans. The conclusions seem apparent. Technology has advanced to a state where early intervention is possible and that when applied, millions of lives worldwide might be saved.

Addendum: Fresh off the presses today is an article in the Independent, a British publication. The article released under the Freedom of Information Act was published in 2005. The conclusions were essentially identical to the study by Hatchett et.al. and can be summarized by the title of the article: The Lost Covid Plan of 2005 is a Tragic Example of Bureaucratic Amnesia!

IS THERE A DIFFERENCE BETWEEN DETECTION RATES OF AXILLARY NODE METASTASES BETWEEN DUCTAL AND LOBULAR CANCER?