DOES THIS NOMOGRAM REDUCE THE NEED FOR SENTINEL NODE BIOPSY? 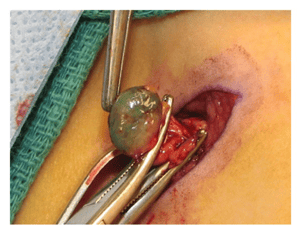 Comment: Right or wrong, I have often opined that sentinel node biopsy (SNB) was a brief stop along the way to addressing nothing in the axilla but the bulkiest disease. Consequently, I am captivated by studies that tend to support my thinking. In practice, I am drawn to mathematical models such as nomograms, the most common of which is the Memorial Sloan Kettering (MSKCC) nomogram for assessing the risk of additional axillary nodes with a positive sentinel node. MSKCC has a similar nomogram for assessing the risk of harboring positive sentinel nodes but does not include ultrasound findings compared to this study from The Rebecca Fortney Breast Center in Annapolis MD. With this bias in mind, I should like to review this study which perhaps might find a place in your clinical practice.

The authors wished to validate a nomogram that claims to identify patients with <10% risk of positive sentinel node(s). “More specifically, the authors used a threshold of positive nodal metastases that would yield a false negative rate of 8.4%, which is the acceptable rate … according to the American Society of Clinical Oncology guidelines.” The nomogram they used incorporates ultrasound together to 1314 Napoleon Ave.#1with other clinical and tumor biologic properties. The nomogram was developed at the Shantou University Medical College in China and is referred to as the Shantou nomogram. It can be found on the Evidencio website. Patients having a positive lymph node core biopsy and those with advanced axillary disease (N2,3) were omitted from the study. All patients underwent sentinel node biopsy. Three hundred fifty-seven patients met the criteria of the study.

Factors included in the nomogram included tumor size, estrogen receptor status and grade; as well as ultrasound findings of cortical thickness, longest axis and absence or presence of the hilum. The Shantou nomogram was able to identify almost 20% of the cohort with <9.3% risk of axillary node metastases, with a false-negative rate of 8.7% (6 patients). Twenty-two patients had a positive nodal metastases score of < 4.6%. None were found to have a positive sentinel node.

Thoughts: The nomogram appears to work well in identifying the lowest risk patients who should not require sentinel node biopsy. These are patients whose score is <4.6% with a zero false-negative rate or a risk of <9.3% with an 8.7% false-negative rate. After substituting various numbers into the nomogram, it became apparent that the decision to proceed with sentinel node biopsy is somewhat intuitive, based on the surgeons’ knowledge of tumor biology, size and ultrasound findings. Nonetheless, the Shantou nomogram does give you a number which is comfortably passed on to patients when discussing your planned surgery. There is one caveat which is noted in the reproductions seen below. In most instances, moving from estrogen receptor-positive to estrogen receptor-negative decreases node positivity risk! Though there is some data to suggest that estrogen receptor and HER2 positive tumors may have a reduced risk of nodal disease, I urge caution when using the Shantou nomogram in sentinel node decision-making for estrogen receptor-negative tumors. Reliability does appear acceptable for hormone receptor positive tumors. 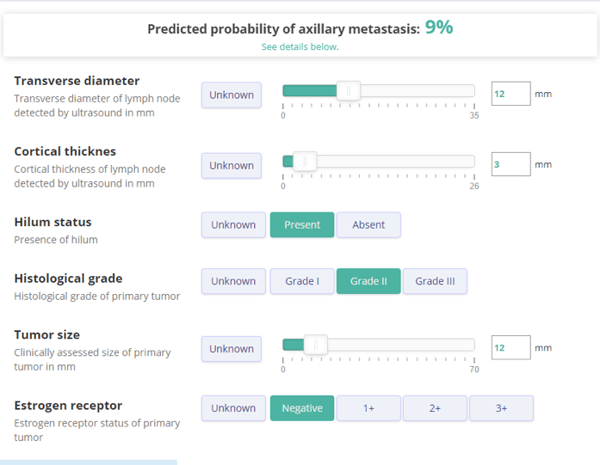 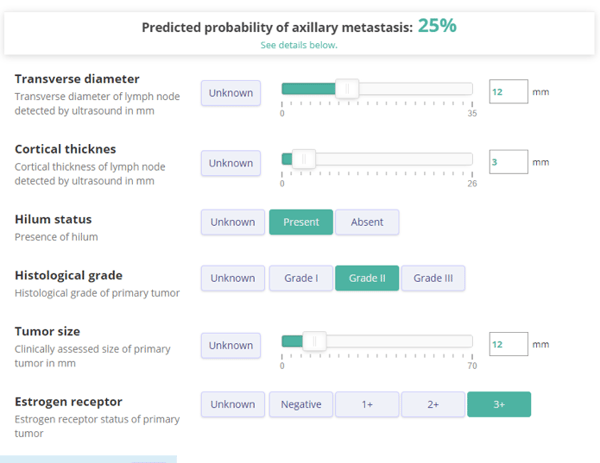