DECIDING WHEN AND HOW LONG TO USE NEOADJUVANT ENDOCRINE THERAPY 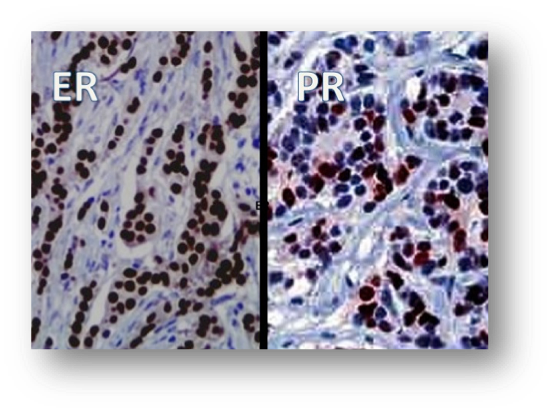 Between seven and 20% of women present with locally advanced breast cancer, and therefore may be candidates for neoadjuvant therapy. The goals of neoadjuvant therapy are to reduce free-surgical tumor burden, increase the rate of breast conserving surgery, allow operability of a previously and operable tumor and to reduce the risk of positive axillary lymph nodes and possibly reduce the need for axillary lymph node dissection. Hormone receptor cancers account for approximately 70% of all breast cancers. It is also recognized that ER+ tumors are less responsive to neoadjuvant chemotherapy and it is therefore desirable to have a robust alternative. Because a majority of cancers are ER+, they lend themselves to endocrine therapy (ER modulators such as tamoxifen, ER degraders such as fulvestrant, and aromatase inhibitors). Studies have shown that 3 to 4 months of neoadjuvant endocrine therapy (NET) can convert up to 50% of mastectomy patients into breast conserving surgery candidates. Nonetheless, NET appears to be inadequately investigated compared to neoadjuvant chemotherapy (NCT), and the optimal duration of treatment remains unknown.

Studies of ER+ tumors suggested only a small number obtain a complete pathological response (pCR) with NET when compared to NCT. In the P024 trial (four months of neoadjuvant letrozole versus tamoxifen) noted that a positive response to treatment increased by 7% for each 1% increase in ER expression. Yet, with such low pCR rates, other biomarkers should be considered. This topic was covered in a recent paper by Madigan et al. in Breast Cancer Research.

The P024 trial showed that pretreatment KIA 67 levels did not correlate with relapse-free survival (RFS) and yet posttreatment Ki67 levels were significantly associated with increased RFS. The post-treatment Ki67 was more accurate in predicting outcome whether it was measured a few weeks into treatment or at the conclusion of treatment. Additionally, it has been shown (IMPACT trial) that in a study of 12 months of NET with letrozole, that post-treatment Ki67 as well as residual tumor burden were the only predictors of progression-free survival (PFS). Nonetheless, in a 2018 study, it was determined that Ki67 did not predict pCR (Goto-Yamaguchi et al. Breast Cancer Res Treat. 2018;172:353-62.).

Gene expression profiling (GEP) was initially used to stratify breast cancers into their biologic subtypes. More recently their utility has been demonstrated for use in clinical management following or preceding breast cancer surgery. An example of this is the 21 gene recurrence score. While a high score can be predictive of a pCR following NCT, the data for NET did not reach statistical significance. In a more recent phase II trial with neoadjuvant exemestane, pre and post-treatment recurrence score were more predictive of outcome than pre-treatment measurement alone (Ueno et al. ESMO Open; 2019:2.). The TransNEOS trial evaluated whether recurrence score could act as a biomarker and predict clinical response to neoadjuvant letrozole. Indeed, among patients with a low score less than 18, 54% achieved a complete or partial response and 79% were candidates for breast conserving surgery. Inda et.al. (Mol Cancer Therapy.2019;21:2) while examining ER target genes, noted that about 1/3 of ER+ tumors had an inactive ER pathway. While studying NET the authors noted that tumors that had open ER pathways had a greater magnitude of response.

in the P024 trial a model was generated to predict relapse risk in patients receiving NET. The authors generated what was called a preoperative endocrine prognostic index (PEPI). PEPI analyzes the postsurgical specimen and combines tumor size (T1/2 versus T/4), nodal status (positive vs. negative), Ki67, and ER Allred score. The final score is associated with RFS. For instance, a score of zero, 1-3, and greater than or equal to four associated with a relapse risk of 10, 23, and 48% respectively. NET is particularly significant for patients with luminal A tumors in that approximately quarter of these patients have PEPI of zero. When combined with a PEPI score, PR may strengthen the possibility of responding to NET. In fact, combined with PR, PEPI-P is a significantly stronger predictor of outcome than PEPI alone.

In the P024 trial, tamoxifen was compared to letrozole in postmenopausal women with ER+ breast cancer who are ineligible for breast conserving surgery. The objective response rate and rate of breast conserving surgery was higher in the letrozole group than in the tamoxifen group. Interestingly however, response rates and letrozole group were higher than for tamoxifen independent of ER expression level! There have been a number of trials comparing aromatase inhibitors or fulvestrant. These trials were unable to find a difference in response rates between one aromatase inhibitor over another. The largest of these trials was Z1031 which failed to demonstrate a difference between exemestane, letrozole, and anastrozole. In the Z1031 trial there was an extension which switched patients to chemotherapy with Ki67 greater than 10 after 2-4 weeks of NET.

in the United States, the use of NET remains slow in the range of 3% of patients with ER+ breast cancer. Certainly one of the barriers to widespread adoption of NET is a long duration of treatment required to achieve a clinical response. Two studies investigated the optimal duration of NET using exemestane. The PTEX46 phase II trial found no significant difference in response rates at four and six months and suggested that four months was the optimal duration. On the other hand, the TEAM trial found a significant increase in response from 3 to 6 months. Extending NET can be difficult because of the challenge in evaluating treatment response and the possibility of disease progression. However, there is good evidence, including the GRETA trial, to suggest that NET for up to 12 months is safe with close monitoring of the tumor.

there has been recent interest in adding CDK4/6 inhibitors to NET. The PALLET trial look at adding palbociclib to letrozole in the neoadjuvant setting. Although a significant reduction in Ki67 was found when compared to letrozole alone, no improvement in clinical response rates were seen. The NeoPAL trial showed that a combination of palbociclib and letrozole produced an almost identical rate of clinical response and rate of breast conserving surgery compared to receiving chemotherapy. The neoMONARCH study combined abemaciclib with anastrozole and showed that there was a significant reduction in Ki67 in the combination compared to anastrozole alone. In the CORALLEEN trial, neoadjuvant ribociclib plus letrozole was compared to chemotherapy in postmenopausal patients with ER+, luminal B tumors. At the end of the trial the number of patients achieving a PEPI of 0 was 17.3% with chemotherapy and 22.4% with the hormonal combination. This was an important trial in that it demonstrated that combining a CDK4/6 inhibitor with an aromatase inhibitor in the neoadjuvant setting, can achieve high rates of clinical response even in luminal B patients. This contrasts significantly with previous thinking that NET should be used only in patients with luminal A cancers.

It has been shown that in well selected patients that NET leads to significant cosmetic and oncologic benefit. There is now evidence recommending aromatase inhibitors in the neoadjuvant setting for at least six months. The use of gene expression profiling, Ki67, and PEPI appeared to be a useful addition to the clinician and patient selection.